We’re ALL fans of Penny Arcade, to be sure, so why should the devs at Turbine be any different?

Now, maybe I’m reading too much into this, but could this be a nod to the infamous Penny Arcade character and perhaps one of my favorite running jokes? (NSFW, in case you aren’t familiar.)

Either way, that’s a damn fine Title, and funny no matter what. Merry Christmas to me!

Being killed by horses. Gruesome.

Anyone who’s read previous posts probably knows where I’m headed with this just by looking at the image above. Unfortunately, it looks like I have to head back into “grumpy gamer” territory once again, but I promise it will be brief. This post’s title is indicative of how I’m feeling about Turbine’s recent decisions regarding mounts, but the title is also an indication of how I’ve recently been feeling about gaming in general. So let’s start with the unhappy stuff; I like to end on a positive whenever possible.

I don’t know who’s making the decisions about what goes in the Store recently, but Turbine has been making fewer and fewer good decisions (in my mind). I was mildly annoyed at the cash-grab, WoW-we-want-some-of-that-crazy-money that is the Steed of Night. But, finally finding the time to log in and check out the Yule Festival (which I love by the way – another top notch job by the Devs!), I was shocked and severely disappointed to find that the first year’s Yule Festival mount was not only unavailable, but had become a Store Exclusive. I swear, Turbine is killing me with these damnable mounts (see where I’m going with the title? <sigh>).

Now, I realize that, one, I can pick the Yule Festival Steed up in the store for relatively little and, two, that it’s my fault for not having picked it up in-game when it was previously available for in-game currency. However, that doesn’t stop it from upsetting me, and here’s why:

And just as icing on this particular cake (though it comes as no surprise to me, or even most people), the “very rare” Skeleton Mount from the Harvest Festival is now also a Store Exclusive! Whee! Aren’t we having fun, kids?

So, for everyone who didn’t get one, here’s your chance. For all those who were lucky enough to win that particular lottery, well…here’s to having your good fortune severely diminished.

That concludes the grumpy segment, except to say this; Turbine’s behavior with the Store is making me increasingly nervous, at an accelerated rate. Either the Store is doing so well that someone in management is pushing these bad decisions without concern for the players, or it’s not doing nearly well enough to keep LotRO a viable, ongoing game. Neither of those is good for long-time fans, and considering the slew of great alternatives on the horizon (SW:TOR, Guild Wars 2, Rift, etc.) now is not the time for Turbine to alienate it’s playerbase.

On the positive side of things, I’ve found myself in the interesting position of being pulled in many directions at once. Normally I’m the type of person to set my sight and go full steam ahead, and DAMN THE TORPEDOES! But recently I’ve found many more things truly competing for the time I spend in MMOs.

First and foremost, it’s the holidays (duh!) and I have two small children. The lead-up to Christmas is a truly spectacular (and insanely frustrating) thing for anyone who has children. Witnessing the wholehearted, unquestioning belief in you-know-who, despite a shameful 9-year-old flat out telling my son the opposite, is a thing of wonder. It is inspiring, and more than anything brings the holiday spirit home.

Second, I’ve found renewed interest in single-player games. We recently moved my gaming rig downstairs, into what will become a full “home office”, which has enabled me to jump into games much more frequently. Before, I was entirely isolated from the rest of the house just to sit at the computer, which was less than conducive, especially during the evening hours. Some might say that having the computer more central and accessible would be bad for gaming, but with two kids and a non-gamer spouse it actually makes it a bit easier.

And, for obvious reasons, single-player games are much easier to enjoy in this setup. Sure, there are times when I’m interrupted every 15 minutes (or 5…GEEZ!). But with the ability to pause, jump out for 30 minutes or so, and jump right back in, I’m 100% more likely to load up a single-player game during peak hours. MMOs have to wait until the late hours of the night when everyone else is asleep. So I’ve been catching up on some games I purchased but never played; I just finished Risen (a very nice RPG I would recommend to anyone) and then decided to try Batman: Arkham Asylum.

Wow. That’s all I can say. What an amazing game; I’ve actually found myself playing that instead of MMOs a few nights running.

Last, and certainly not the least, was a run-in I recently had with a friend I hadn’t seen in years. Both of us are students of the same style and while he has many years more experience than me, he is a great teacher and friend and loves to practice; someone from whom I always learn something valuable and from whom I draw a great deal of inspiration (for certain aspects of life). I was able to spend a good number of hours revisiting skills I had forgotten, or let slip, and he reignited an enthusiasm that has been dwindling recently.

Practicing with him didn’t just inspire me to reach for greater skill, it also showed me how far I’ve come since I last had a chance to practice with him, many years ago. Both things are inspiring, and have made certain aspects of the digital realm a little less appealing. Because, at the end of the day, what have I accomplished when playing games? I might have a new cosmetic title or checked off another box on my growing list of To-Do’s, but what do I really have to show for it?

Yes, I’ve had fun and pursued a hobby I’ve loved for decades, and yes, in many cases I’ve shared a fun experience with friends. I’m not devaluing either of those things. No, I’m not considering a hiatus from gaming. But it certainly has given me a lot to think about, and perhaps a reason to shift my priorities a little.

As is usual with Turbine, the November Update went live without major issues. Every time there is a major patch, I am reminded of how good Turbine is at what they do (with LotRO, that is; I’m not as sure about DDO though it seems just as solid); just as the launch of LotRO set the high standard for professional, polished MMO launches, Turbine continues to deliver a painless experience on patch day. Perhaps I’m more impressed than many, but I remember the early days of the genre, when patch day could mean patch days, as everyone tried to grab the update at the same time or log in at the same time to see the changes, and inevitably overwhelmed the servers.

I logged in last night to check out some of the new mounts, and quickly realized that I’m really going to need to step up my economic game. The new mounts are, by and large, beautiful, and it’s going to take a lot more gold than I have on hand to pick them all up. I managed to grab the Rivendell reputation mount, and was automatically awarded the Elven reputation mount (requiring Kindred status with the three current groups of Elves – Rivendell, Galadhrim, and Maledhrim). The Rivendell mount is nice, but the Elven Lord mount is beautiful. I particularly like the standard: 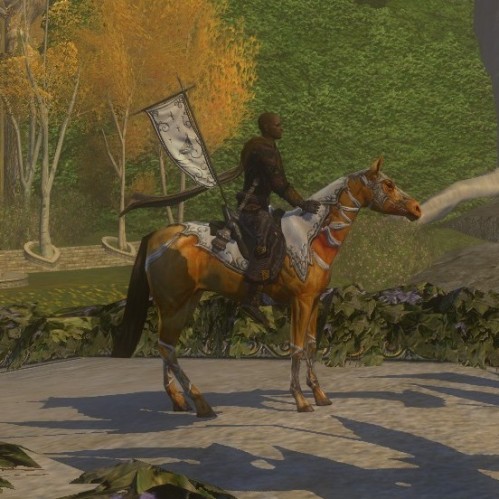 Though I wasn’t as excited about the Rivendell Horse, as I’ve described before, I have a thing about mounts. In short, I must have them all.

It’s a long-term goal, to be sure, but with so many new mounts introduced at the same time, my head is spinning a bit and my wallet has taken a serious hit. I usually hover at the 25 to 30 gold mark, which I consider good and safe (though I’ve heard of some people sitting in the realm of 200 or more!). I don’t know why, it’s not like I’m accruing interest…I just don’t spend it all that much. But between the November Update and my decision to upgrade to a premium house, I’m starting to run a little short for comfort. But I guess gold is there to be spent…

And, no, I don’t have any intention of participating in Turbine’s recent entry into the Miss Conspicuous Consumerism pageant. One, I’m a little ashamed that it’s there at all, two, I’m not buying a single digital item for that much money, and three, if I can’t earn it in the normal course of having fun (or, if necessary a bit of hard work) then it’s not worth it to me to have it. Not to mention that if it’s like everything else in the Store, it’s really a matter of timing to grab it on sale (I highly doubt that it will ever go on sale). But first and foremost, it adds yet another bit of bad onto my growing sense of unease about the direction Turbine has been headed since the announcement of Free To Play; in my heart, I feel them moving away from Tolkien and farther and farther towards Arthas. Towards the Kotick model of hook-’em-and-exploit-’em.